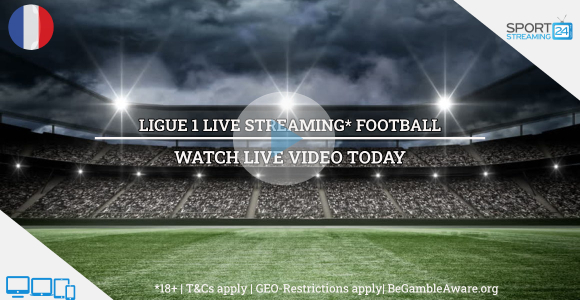 #ad *You must have a funded Sports account or have placed a bet within the last 24 hours in order to view bet365 streams | Geo-Restrictions apply | bet365 is not permitted to stream certain events to the host country. They use your IP address to present the events available to you. Excluded countries include Andorra, Saint Barthelemy, France, French Guiana, Guadeloupe, Monaco, Saint Martin( French part), Madagascar, Martinique, Mauritius, New Caledonia, French Polynesia, Reunion, French Southern Territories, Wallis and Futuna and Mayotte

Watch Ligue 1 live stream video and enjoy in spectacular performances of numerous future stars such as Monaco's Mbappe and Nice's Plea and the players who are already world class, such as Cavani, Lacazette, Falcao and Balotelli. PSG dominated the league in the past few years, but Monaco and Nice are challenged them this season and made the race for the title very interesting.

You can watch live stream from Ligue 1 every weekend and cheer for your favorite teams. Experience the hype and excitement first-handedly and take the front row seat and watch the finish of Ligue 1 season.Saint Etienne is the most successful club in French professional era, with 10 titles, but the last one came in 1981. Marseille won nine titles, one in the 21st century, Nantes won eight titles, the last came in 2001 and Monaco won seven titles, the last in 2000.

Lyon also won seven titles, but they dominated the French League in the first decade of the 21st century - they won all their titles in the row, from 2002 to 2008.
Bordeaux won six titles, while in the last four years PSG left their mark by winning four consecutive titles, six overall. Reims also won six titles, Nice four, Lille three, Sochaux and Sete 2, Lens, RCF Paris, Strasbourg, Lillois, Roubaix-Tourcoing, Auxerre and Montpellier all won one title each.

Ligue 1 became one of the top five European leagues and there are many teenagers that are waiting to be discovered by the biggest clubs in Europe.
Watch Ligue 1 live stream and discover all those young starlets yourself!